"Devine & Smash Miss M" Dolly was born in a kennel in the West of Sweden, on the 19th of November 2017. Her mother was Westie of the year 2016 in Sweden 🇸🇪, her father a strong and proud Westie male, both passing on their good genes of a purebred West Highland White Terrier to Dolly and her siblings. Though Scottish by race, we sometimes refer to Dolly as our «IKEA» girl ... 😆

At nine months, Dolly joined a small kennel in Transylvania, Romania 🇷🇴, where she was taken for breeding. She had one lovely litter but began to refuse any further pregnancies. Her owner, a veterinarian, was sad having to give her away and through word of mouth in the Westie breeder and championship scene a new home was found just outside of Zurich in Switzerland 🇨🇭.

This is how Dolly came to us on the 10th of May 2021 after an 18 hours car ride all the way from Romania to Switzerland.

Dolly greeted us with open paws and accepted us quickly as per new family. She came with all the valid documents and vaccinations, health check-ups and official customs papers. But most of all, she brought along her very loving personality, huge curiosity in everything, the breed's typical stubbornness, the desire to always greet dogs and people she meets, a genuine addiction to sniffing, she is a gourmet and she can really lose it when zooming around in the fields playing with her doggie friends. All of that is also called "westitude".

We are very happy that Dolly found her way to us. We love this wonderful Westie-Lady to the bits. In this blog, Dolly will talk about her little adventures.

One year later: Dolly's retrospect of her move to Switzerland: https://www.dollythewestie.com/2022/05/1-year-in-switzerland-today.html

All Comments
The Adventures, Stories and Thoughts of the little Westie-Lady Dolly, living in Switzerland.

When this pitbull-faced boss of that big country in the East sent his troops into the Ukraine on February 24, 2022, my groomer, Westie breed... 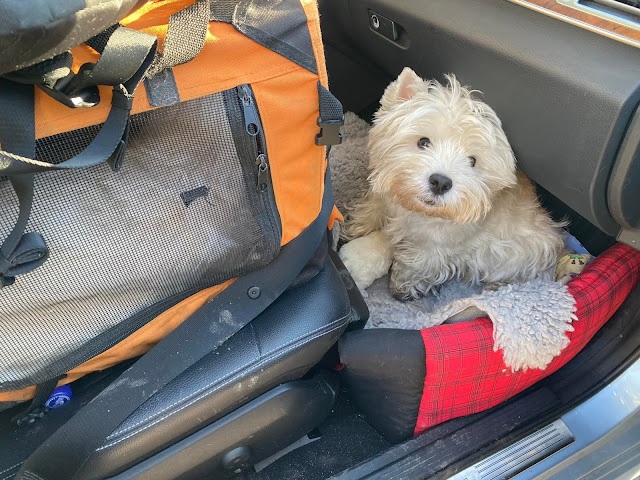